“It is unprecedented for an Acting U.S. Attorney to contradict the solemn representations that career prosecutors made time and again, and undermine the district court’s legal and factual findings”

As a veteran* practitioner of the law, I have no true words to adequately express the height of disingenuous emanating from Justice Sullivan’s assertion that HE as a judge made “legal & factual findings” regarding a “guilty plea”.

(*And I do not use “veteran” lightly)

The ONLY way that a trial judge makes “legal & factual findings” is through a FULLY litigated process: A TRIAL. De facto, there was NO trial.

For Judge Emmet Sullivan to even put in writing—and worse THROUGH COUNSEL—the notion that “the district court” made “legal and actual findings” at a plea proceeding is a sham, in and of itself.

It tickles my funny bone that Judge Sullivan did not have the fortitude (and I’m sure you all know the descriptor I really mean) to explicitly make attribution using his personal name—Judge Sullivan’s “legal and factual findings”. 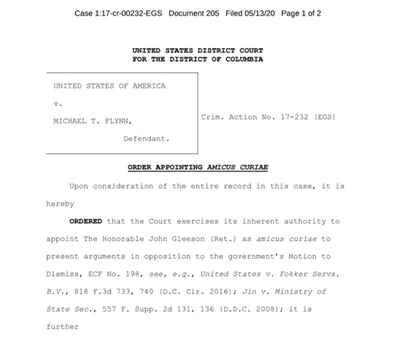 As seen from the language Judge Sullivan used in this 1st portion of the Order, he outwardly and unapologetically declared that his objective—in no uncertain terms—is so he, as judge, can take over the role as prosecutor; a blatantly expressed intention to completely ouster the DOJ of its designated prosecutorial role.

In Judge Sullivan’s own words, he conveys a no-holds barred intent to invalidate the DOJ’s motion to dismiss via his “amicus curiae” appointment—doing so with such magnitude as if he wrote it in neon lights on a blazing billboard.

The function of a trial judge is to ensure the administration of the process is fair & impartial. The key concept being: a procedural role. Not a litigator!
(Grand Jury Proceedings: The Prosecutor, the Trial Judge, and Undue Influence, 39 U. Chi. L. Rev. 761 [1972])

In Justice Sullivan’s own written words, he is anything other than fair and impartial; and even more so, his own words bolster improper motives.

What is so bizarre is Judge Sullivan’s citing to a case that actually NEGATES his judicial action!!

“[T]he ‘leave of court’ authority gives no power to a district court to deny a prosecutor’s Rule 48(a) motion to dismiss charges based on a disagreement with the prosecution’s exercise of charging authority.”

As seen from Judge Sullivan’s own filed response with the D.C. Court of Appeals, he thinks the U.S. Folker case advocates for a judge to not be a rubber-stamper.  #ConfusionOnTheBrain

The detailed rantings by Judge Sullivan and his counsel in his filed response claiming that the DOJ’s motion to dismiss arose from nefarious conduct appears to be a CYA move. No where in the May 13, 2020 Order did Judge Sullivan articulate any mention of such claim.

I suggest the lack of any mention of DOJ misconduct in his May 13. 2020 Order speaks volumes.

If this weren’t such a travesty of justice, such judicial conduct would be comedic.

Is the dog chasing its tail or the tail chasing the dog–the very basis of the DOJ’s motion to dismiss is because of the 3-year hell of government misconduct.

To sum up: the U.S. Constitution precludes a trial judge from usurping the role of the DOJ.